The legends of coffee and tea

Coffee and tea are two world famous beverages consumed by millions of people every day.

Being big consumers ourselves, we wondered how these products had been discovered, how it was known, for example, that the seeds of this tree had to be roasted to obtain such a beverage!

And in our research, we discovered a world of legends, each one more interesting (and crazy?) than the other.

Here is a summary of what I discovered. Let's admit that some legends make you want to believe in them so much they are fun :D

The history of tea is rich in legends, which know how to intrigue us and make this thousand-year-old drink precious and mysterious.

Each country, from China to Japan, through India, has old beliefs have maintained the myth around this magical beverage.

Let's take a look at those known:

In 2737 BC, the Chinese emperor Shennong or Shen Nong (神農) was known as a physician, a fine botanist. He was nicknamed the father of agriculture, or the "divine harvester".

In order to fight against various epidemics of the time, he asked that water be boiled before consumption.

According to Chinese tradition, this emperor had a transparent stomach, which allowed him to follow the different actions of plants on his body. 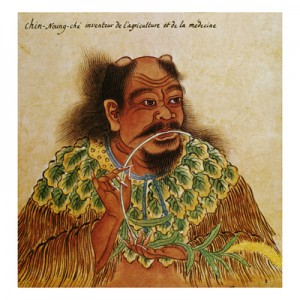 While he was resting leaning against a tree, sitting next to a cauldron filled with simmering water, tea leaves carried by the wind would have fallen inside the cauldron.

The water would have quickly become tinted, giving an unknown and delicious flavor to the water.

By observing its transparent belly, the Chinese emperor Shennong noticed all the beneficial agents contained in this strange plant.

It is said that he was so impressed that tea became a staple in Chinese culture. 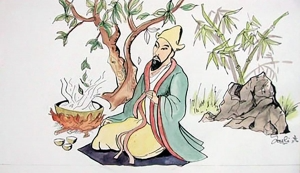 In the 6th century, Prince Bodhidharma, the third son of King Kosjuwo, had a revelation that he was to travel to China to preach the precepts of Buddhism. He vowed not to sleep during his journey, which lasted nine years.

At the end of the third year, exhausted and about to fall asleep, he picked some leaves from a shrub and chewed them. He immediately felt the invigorating virtues, and so he gathered more leaves, using them to finish his journey and stay awake during the last years.
It was a tea tree.

It is also said that at the end of his nine years of meditation, Bodhidharma reached a state of grace where he merged with the universe, understanding and feeling the absolute. By staring at a rock, his image was engraved on it.

Legend has it that he is the founder of all martial arts and of the famous Shaolin temple.

It is somewhat different from the Indian version.
The prince Bodhidharma, exhausted, fell asleep after 3 years of travel.
When he woke up, ashamed of his weakness and angry with himself, he cut off his eyelids and threw them violently to the ground.

A few years later, he returned and found that a shrub he did not know had grown in the exact spot where he had thrown his eyelids.
Intrigued, he tasted the leaves and realized that they had the properties to stay awake.
It was a tea tree.
He told the people around him about it, and they began to grow tea in the places where the Prince passed.
Bodhidharma's philosophy will become in the 11th century the Zen philosophy in Japan.

Science and legends about the origin of tea agree about its location, but have different opinions about its birth in time.
According to the specialists, the origin of tea is located in a relatively vast space including the region of Assam (in the North of India), the North of Burma, Laos, Vietnam and Yunnan (in the Southwest of China).
Yunnan is home to the oldest man-made tea plant, dating back more than 3000 years.
However, recent archaeological studies have revealed the existence of tea plants cultivated 6000 years ago in China in Zhejiang.
The first written records date back to 200 BC. Tea is described as a medicinal plant.
The art of tea and brewing dates back to the 8th century, with different methods of production, processing and tasting. Like tea, coffee has inspired many legends.
Here are the most famous and widespread.

One day, a hermit from Abyssinia (Ethiopia), very old and very pious, finally fell into a deep sleep, so busy praying, fasting and doing penance.

When he woke up, he was amazed to find that the stick he was leaning on had taken root, and that red leaves and fruits had grown.

This was the creation of the first coffee tree.

Kaldi and his goats

This is probably the best known and told legend.
About 850 years before our era, Kaldi was a shepherd in Yemen. One day, Kaldi, who was peacefully grazing his gentle and obedient goats on the grounds of a monastery in Yemen, saw them eating red berries from a dark shrub.

A few minutes later, the goats were jumping around and seemed much more lively than usual.

Intrigued, the shepherd went to the monastery and told his adventure to the monks, who immediately decided to prepare an infusion.

They found that they could pray much longer without feeling the effects of fatigue.

Some time later, one of them returned from harvesting on a rainy day. He put a branch to dry on the fire and forgot about it.

When he came back to find his branch, he enjoyed the smell of the roasted seeds.

He ground them into powder and brewed them: this was, according to the legend, the very first roasted coffee.

One day, a forest fire in Abyssinia (Ethiopia) hit many coffee trees.

They gave off such a good smell that the inhabitants, as soon as the fire was out, went to collect the beans.

They crushed them and then infused them in water and thus discovered the very special taste and the virtues of coffee.

Omar and the bird

One day, a man named Omar, expelled from the city of Moka in Yemen, found himself wandering in the desert.

At the end of his strength, he suddenly saw a very agitated bird on a shrub eating its fruits, which flew away at his approach. Omar decided to prepare a drink from the fruit of this tree, drank it and suddenly felt much better.

Later, he met a pilgrim on his way to Mocha, with whom he shared his discovery, and the latter, as soon as he arrived in the city, praised the ingenious man.
The people then took him back to the village and carried him in triumph.

One day, the prophet Mohammed, who was very ill, had an apparition of the angel Gabriel sent by Allah.

To help him recover, the angel offered Mohammed a black beverage that immediately gave him back his energy: coffee. Within an hour, Mohammed is said to have defeated 40 horsemen and honored 40 women.

He called the drink "Quava" (pronounced kawa), a word still used in the Middle East for any drink made from a plant or fruit.

Experts agree on the country of origin of coffee.
It is in Ethiopia, in the Kaffa region, that the first coffee trees were cultivated and that coffee began to be consumed.

Ali Ben Omar Al-Shadili, considered the patron saint of coffee growers and consumers, seems to be at the origin of coffee exportation.
In the 15th century, he is credited with the construction of a small port that would later belong to the future city of Moka.
The port of Moka kept for a long time the monopoly of the coffee trade, in particular the deliveries to Europe. The Ma Caféine blog is created to share our passion, our tips, our recipes and our gift ideas.

For orders over $65 in Quebec and Ontario! Pick-up and drive-through service available in Boucherville. Details here

If you're not completely satisfied, we'll exchange or refund within 30 days of purchase.
Details here

We are there for you. We answer the phone and emails. Don't hesitate to contact us.